Why conservation is a gospel issue

A report from the World Conservation Congress, 1–10 September 2016. First published on Christianity Today on 8 September.

The International Union for the Conservation of Nature and Natural Resources convenes every four years. So this year’s gathering in Honolulu, Hawaiʻi, is held in the shadow of the World Wildlife Fund’s 2014 report claiming that in just 40 years, over half of the world’s wildlife has been lost.

Until recently, the conservation movement has been overwhelmingly secular. But the sense here is that this is a moral and even a spiritual crisis. As Gus Speth, who helped found the Natural Resources Defense Council and was dean of the Yale School of Forestry and Environmental Studies, told a British radio presenter in 2013:

‘I used to think that top global environmental problems were biodiversity loss, ecosystem collapse, and climate change. I thought that with 30 years of good science we could address these problems, but I was wrong. The top environmental problems are selfishness, greed, and apathy, and to deal with these we need a spiritual and cultural transformation. And we scientists don’t know how to do that.’

Reflecting this shift in emphasis, a ‘Spirituality Journey’ is included in this year’s conference programme for the first time. The conference’s location in the Pacific region, where spiritual life is less segregated from public life than in Europe, may also make a difference. At the opening ceremony, in language that differed markedly from previous Congresses, ‘Our heavenly Father’ was thanked for his ‘creation.’ Indeed, many conservation professionals and scientists, particularly but not at all exclusively from the Global South, have a living Christian faith. Integrating it into their working lives can be a real challenge, however. They work with paradigms and language, such as ‘natural resource management’ or ‘ecosystem services,’ that took shape before the days of Christian involvement. Consider the contrast with medical work, for example, which developed worldwide, over many centuries, out of specifically Christian compassion. 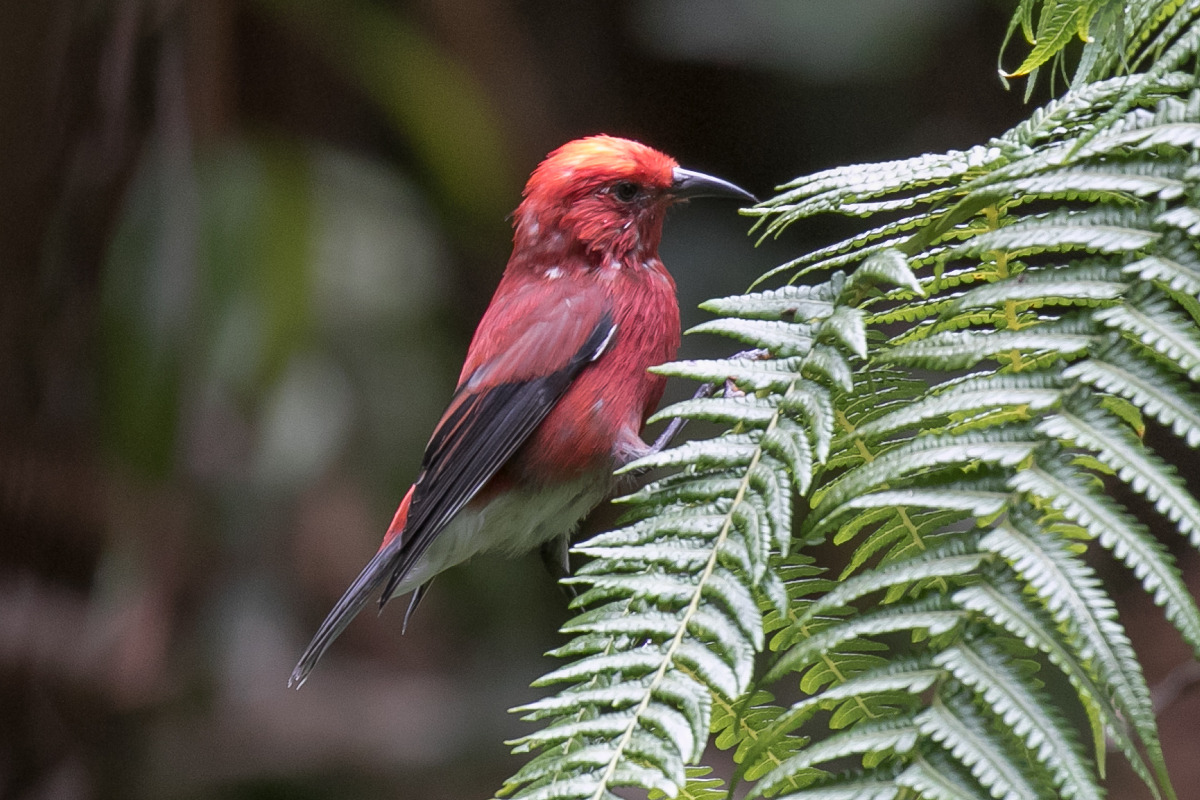 The ʻApapane Himatione sanguinea is a beautiful but endangered species, endemic to Hawaiʻi.

Perhaps because of this rootlessness (it has been said that environmentalism is ‘an ethic in search of a religion’) and also because policy-makers and ordinary people so often seem disengaged from the clear and present danger to biodiversity, the global conservation movement is urgently searching for clarity about why nature matters. Currently there are two leading proposals: that nature matters because we need it to survive as a human species, and that nature has intrinsic value. Both find echoes in the Christian gospel, but neither is adequate on its own. Christians could point to the global, indeed cosmic, sweep of Paul’s language of ‘reconciling all things’ (Colossians 1:20), to the picture of the entire creation groaning as it awaits humanity’s liberation from our own enslavement to sin and the exploitation it brings (Romans 8:19–24), and to Psalm 104, one of the earliest and most beautiful hymns to biodiversity, with its conviction that God has made everything in love and wisdom.

But deeper Christian engagement with the conservation movement will expose some uncomfortable truths. A Rocha is the only international Christian conservation organization present among 9,000 delegates at the Congress. If this were a comparable international event on human development or disaster relief, over half the organizations present would acknowledge a Christian identity or history.

So it does seem to our colleagues and friends in the conservation world that very few Christians care, even though they hear us say that we believe the earth is the Lord’s, not merely an environment of ‘natural resources’ for human economic development. Conservationists hear messages of indifference, or worse, from some of the more vocal Christian leaders they encounter in the media. The prosperity gospel that resounds in so many parts of the world, with its unthinking embrace of unbridled consumption, makes no sense to those with an acute sense of limits and planetary boundaries. So many conservation leaders are not surprisingly sceptical that the Christian faith is transformative.

There are two things we can do to help change this perception. First, we can help those who have been doing great work to tell their stories more widely. This morning, as we ended the prayer meeting we convene every day in the Congress exhibition hall, Osvaldo Munguia from Honduras told me about the work of his organization, Mopawi. Mopawi works on behalf of the Miskito people, who live in the rainforest of eastern Honduras. With great sacrifice motivated by constant prayer, and facing intense pressure from the government and agribusiness interests, Munguia and Mopawi have secured land rights, and thus major conservation gains, of over 1.4 million hectares − a unique achievement in Central America. 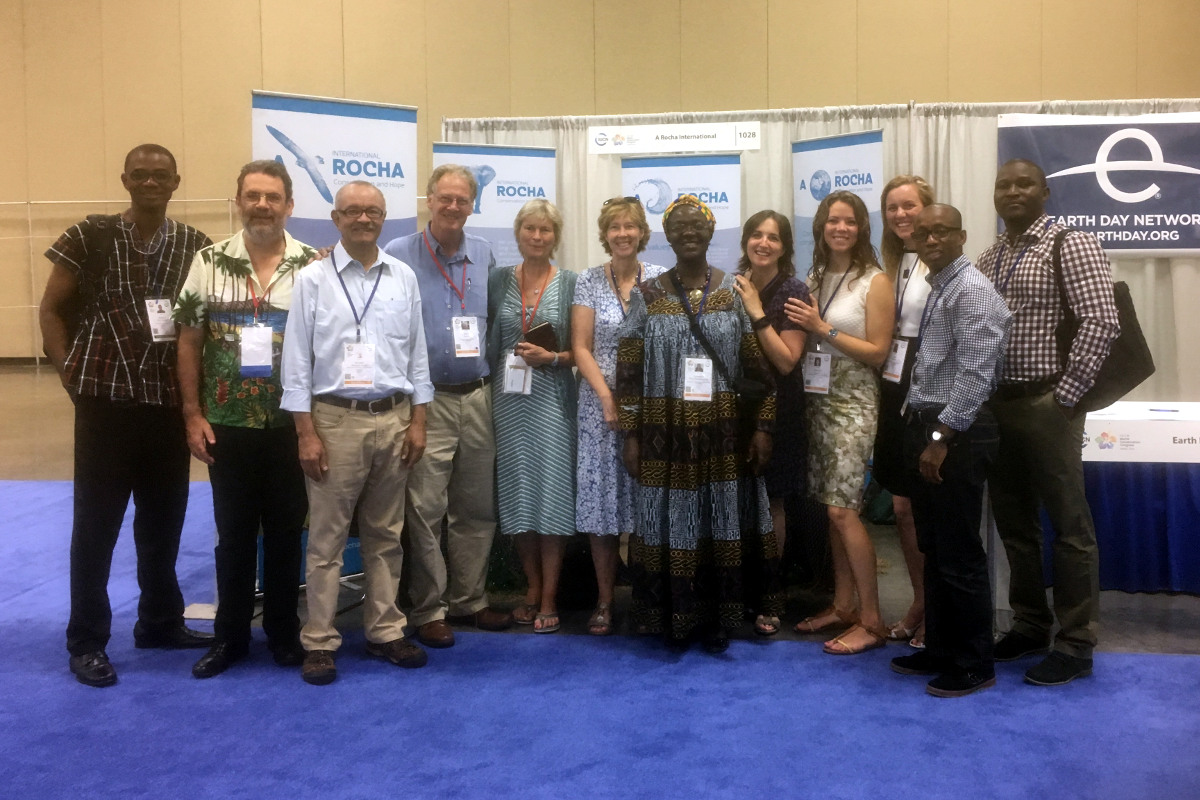 Some of the A Rocha team, with friends, at the stand.

There are many stories of quiet heroism like this to be told, but Christian media often fail to make the connection between the mission of the gospel and environmental issues, and give them little attention. Secular media, on the other hand, that are used to covering environmental activists are confused by the wider and more holistic agenda of many Christian groups. They have never encountered people, motivated by faith, who combine a concern for animals and social justice, or for environmental and economic health. Pope Francis’s encyclical Laudato Sì has helped to introduce both Christians and secular audiences to a different and better discourse, but there is much more to do.

We also need to change how Christian money is both earned and given − helping generous Christians make their money in ways that are better aligned with how they give it. It makes no sense to gain wealth by depleting God’s good earth and then to give from the profits to repair the human and creational damage. And far more Christian giving needs to be allocated to repairing the ecological devastation that is responsible for so much human distress. Much human suffering comes from upstream causes in a groaning creation: species loss, deforestation, water shortage, pollution, climate change and many of the other well-documented drivers of the crises in our century.

A few days before the Congress, President Obama announced the creation of the world’s largest marine reserve, The Papahānaumokuākea Marine National Monument off the coast of Hawaii. The existing reserve will more than quadruple in size, expanding to over 582,500 square miles, or roughly twice the size of Texas, according to Reuters. Even so, another President who spoke at the Congress, Tommy Remengesau of Palau, while praising Obama for cementing ‘his legacy as an ocean leader,’ challenged the United States to follow the example of Palau by turning 80 percent of its maritime exclusive economic zone into protected waters. Currently only 2 percent of the world’s waters are designated as marine sanctuaries. Palau intends to forward a motion that would raise this figure to 30 percent. (Pacific nations like Palau may be tiny by population and terrestrial area, but they control areas of the earth’s surface four times that of the United States.) Many scientists doubt that even these ambitious targets can match the scale and rate of current marine species depletion.

Similarly, the 2011 Bonn Agreement is aiming at the restoration of 1.5 million hectares of forest, which is a wonderful prospect and sounds very impressive. But set against the 2014 estimate of the Global Environment Facility that 2 billion hectares are degraded globally, it seems to be far short of what is needed, not least as the degraded area has grown substantially since the last surveys.

Until a truly persuasive and coherent way of valuing nature captures the attention of politicians, business people, farmers and fishermen, we are likely to see the current devastating trends continue. Christians, of course, have exactly such a coherent view available to us and there are many Christians around the world who are deeply engaged in caring for creation. But we are still just beginning. Our worship and work and witness will be incomplete until our responsibility to conserve the glorious, God-given diversity of earth’s creatures becomes second nature.

You can see Peter’s fifteen-minute contribution to a multi-faith panel at the World Conservation Congress in the video below.

4 responses to “Why conservation is a gospel issue”