The Bulkley River is one of the most negatively impacted watersheds in Northern British Columbia, Canada: agriculture, forestry, mining, pipeline corridors, settlements, railway and highways have taken their toll. This is where the A Rocha–Upper Bulkley River Streamkeepers Project in Houston BC calls home. The vision of our watershed stewardship programme is that in 10–20 years people will look back and say the opposite: that it’s the most positively impacted watershed in the Skeena system because of human activity and our community [1]. Our hope is to restore the watershed so that salmon populations and everything that depends on them will enjoy a healthy ecosystem. What does this look like? Riverside vegetation restored, erosion minimized, water quality improved and the watershed cared for in a way that benefits both the people and animals that depend on it . 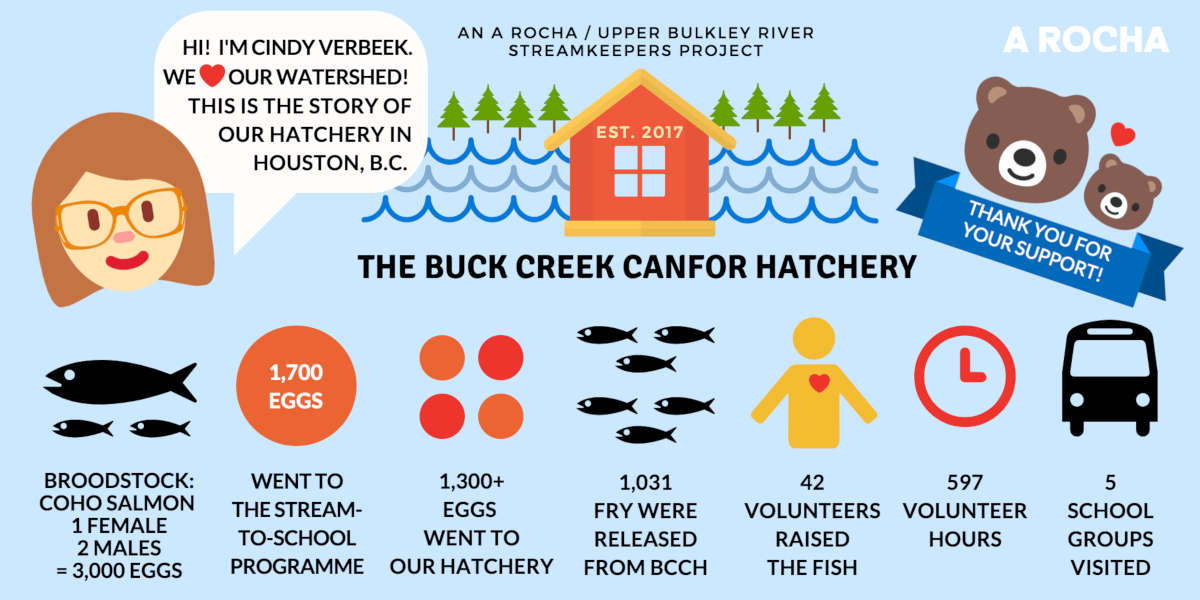 A 77% survival rate from egg to fry in our hatchery compared to a 1% survival rate in the wild means that more fish will make it back to spawn and we’ve given these salmon a good head start.

I attended Au Sable in 1993 and started dreaming about opening a Canadian Christian environmental school. It was why I became involved in A Rocha. In 2015 several of us had the idea to open a fish hatchery and nature centre and the community got excited. Our pilot hatchery in 2015/2016 was a great success, and after fundraising for a year, we established the Buck Creek CANFOR Hatchery in September 2017.

What does conservation and hope mean to me? Conservation is figuring out how God creates and sustains creation and then bringing my actions into alignment with what He calls good . It’s walking alongside the Creator of the universe and bringing healing to that which is broken, protecting what’s still working well, and speaking up against injustice. All of this is in the knowledge that there is hope: not based on my success, but because Jesus died to heal the brokenness and to reconcile us to God, each other and all of creation.

This work can be hard: Moments of loneliness and doubt, finding dedicated and consistent volunteers, and feeling the weight of the success of the project as well as the lives of over 1,000 fish on my shoulders take its toll. But it’s not all hard. The best part of the job is seeing the joy and delight on people’s faces as they let the fish go and watch them swim away . After volunteers lovingly cared for the salmon eggs, the day came for the salmon fry to be set free. As we poured them out into the river and said goodbye, we felt mixed emotions: excitement; fear for their difficult journey ahead; and hope for their future in the wild. They will fatten up in the Bulkley river to get ready for their epic journey to the ocean next spring. We expect 30-40 individuals back from this group compared to just two if they were wild. This number isn’t huge, but our main goal isn’t repopulating the salmon in our watershed. It’s to create a healthy ecosystem by helping the members of our community experience a deeper connection with the river. Like the returning salmon that feel the pull of home, I hope this community feels the Upper Bulkley is part of what home means to them: a place of mutual belonging and a place to cherish.

Sometimes I get overwhelmed with the enormity of the brokenness in the world and how little I can do. I have a saying on my wall attributed to Rabbi Tarfon [2]:

Do not be daunted by the enormity of the world’s grief. Do justly now. Love mercy now. Walk humbly now. You are not obligated to complete the work, but neither are you free to abandon it.

If you feel called to a place or habitat, my advice is: don’t move. Get grounded. Learn all you can about the species and people who live there. Get out and connect as often as you can. Find people who care about what you care for, and don’t stop praying. For me being a part of the A Rocha family gives me hope. Although I cannot do everything, I can do something. I’m encouraged there are other people doing something in their backyard, and I have faith that together we can bring restoration. Together we are making a difference.

[1] Scientists from Oregon State University have studied the positive impact of watershed groups on water quality in the US, concluding: ’their increased presence resulted in lower dissolved oxygen deficiency and higher proportions of swimmable and fishable water bodies.’

Since 1996 Cindy has volunteered with A Rocha in Portugal, on the Canadian Board of Directors, as a newsletter editor, and as community group leader in Edmonton until she moved to BC 15 years ago and became A Rocha’s Northern BC Representative & Community Mobilizer. Cindy is a graduate of King’s University College with a BSc, and a Naturalist certificate from the Au Sable Institute in Michigan. She is currently based in the beautiful Bulkley Valley in Houston, BC, where she lives with her husband Dennis and their children.

View all posts by Cindy Verbeek (1)