When is a good time to talk about climate change?

Hurricane Irma of 2017 proved to be a storm of record-breaking dimensions and power. Communities all along its track from the Caribbean to the southeastern USA are only just beginning to come to terms with the devastation it caused. Satellite images showing Irma as the size of Texas were truly sobering.

But devastation of communities and habitats was not all that Irma left in its wake – an intense public debate immediately started about whether or not we should talk about climate change at times like these. 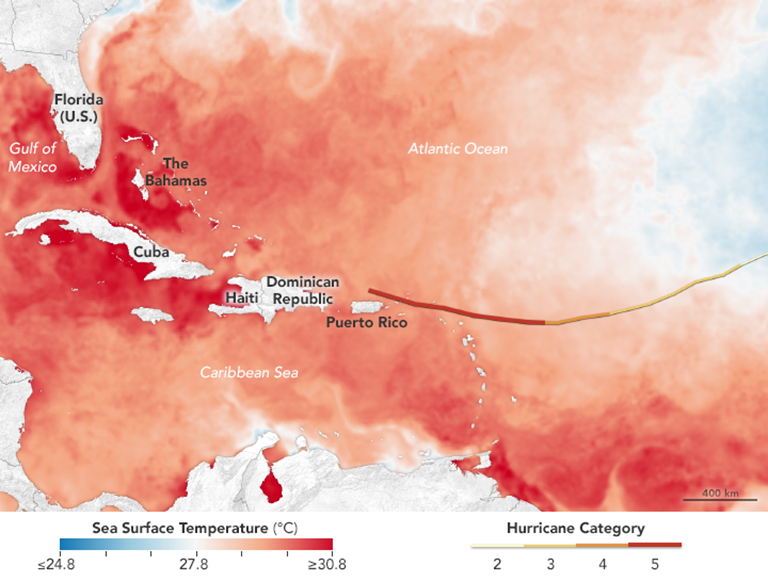 Caption: Sea surface temperature mapping, by NASA. The warmer the water, the more power to hurricanes.

Some, such as the administrator of the USA’s Environmental Protection Agency, Scott Pruitt felt it was “insensitive”. He has previously made no secret of his own scepticism of the scientific consensus that human activity is inevitably leading to more extreme weather events like Irma. Others, such as the UK’s Minister of State for Foreign and Commonwealth Affairs, Sir Alan Duncan, rebuked the only elected Member of Parliament for the UK Green Party, Caroline Lucas, for suggesting that it was the right time to discuss the wider issue of climate change, saying that she was ‘lacking humanity’ for ‘linking Hurricane Irma with climate change.’

A Rocha’s concerns as Irma approached the USA were personal and immediate – our marine team leader Bob Sluka and his family had recently re-located to coastal Florida (you may read his first-hand report, Waiting for hurricane Irma). And it is in that personal vein that we should first respond as Christians and fellow planetary citizens to those communities that have been battered and bruised by these truly shattering storms – by standing with them in grief and reaching out to them with loving support. Churches and NGOs are rightly at the fore front of community efforts to provide clean water, food, shelter and all that is needed in a coordinated disaster response. But as the floods recede, and people and places begin the long recovery, we also hope to support the emergence of a wiser and de-politicized conversation about climate change that is rooted in two Christian convictions. The first is that people who are made in the image of God have a sacred mission to live by the truth that sets us free. So the practice of honest science can be a holy calling, however unwelcome the data to our previous ways of life. And secondly we have an equal, Christ-inspired calling to care for the wider creation and for poorer human communities, both of which are proving themselves to be the most vulnerable to the effects of our rapidly changing climate.

Recent events bring even more determination to live out those convictions. Even this year we have witnessed flooding in south Asia where according to International Health Partners 1400 people have lost their lives and 40 million have been affected by rising waters in the last two months, we have seen a heatwave and then fires that caused unprecedented numbers of deaths in Portugal, and several other A Rocha teams around the world report extreme weather events that have directly affected their work. All of these phenomena closely correspond to the predictions of climate scientists. So for us this is a matter of compassion and truth-telling, and as the issue is fundamentally rooted in the choices of human societies that are in turn guided by what they know and believe, our first response is moral and not political.

We are proud to be hosting the eminent climate scientist Katharine Hayhoe in UK for our evening London Lecture on November 16th, and she recently argued in the New York Times that ‘When we try to warn people about the risks, there’s no ‘news’ hook. No one wants to listen. That’s why the time to talk about this is now. The most dangerous and pernicious myth that we’ve bought into when it comes to climate change is not the myth that it isn’t real or that humans aren’t responsible. It’s the myth that it doesn’t matter to me. As humans, we are all too good at pretending that a risk, even one we know is real, doesn’t matter to us.’

So we believe not just that this is the right time to be talking about climate change, as well as acting to protect people and non-human species from its immediate impacts. And we also believe that a better conversation is possible and it is one that should be welcomed by all those who are committed to knowing the truth that sets us free, and to finding that truth by every available means.

5 responses to “When is a good time to talk about climate change?”