My mother-in law wears a bikini. She is seventy years old and decades of gravity have done their work. But she wears a bikini nonetheless, with a devil-may-care nonchalance to what others her age are more inclined to cover in sarongs, ruffles and cruise-wear. 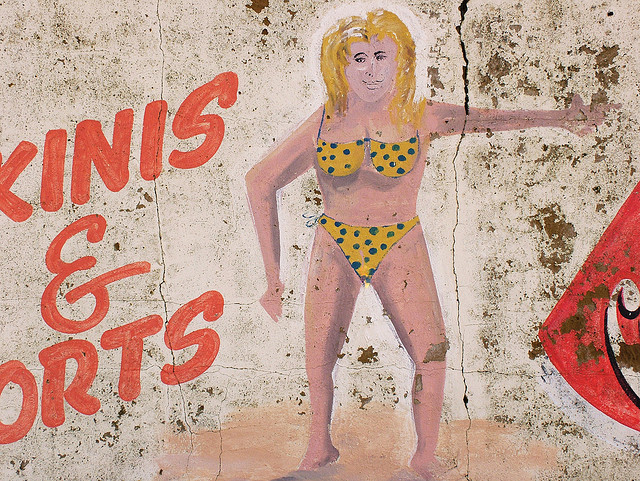 Her okay-ness with her body has a two-fold source. First, she’s Finnish. Do you know any Finns? Untouched by Puritanical prudishness, Finns share a continental European lack of modesty concerning the body, but to the extreme. While other Europeans are going topless on the warm and sunny beaches of the French Rivera, the Finns are flinging themselves buck naked from their saunas into the SNOW. There’s a reason to take off your shirt in the south of France—it’s hot! But why subject your whole bare self to the crunch and scrape of ice in the dead of winter? Whatever the reason, the point is, Finns are a people profoundly okay with their bodies.

How does this relate to faith and caring for creation? My mother-in-law is also a devout Christian and I think her embrace of the bikini as her swimwear of choice goes beyond her Finnish heritage to her biblical understanding of creation. She understands that when it says in the Bible that Adam was formed out of the dirt (adama in Hebrew) that she too is a human formed out of humus and that humus is good. She actually believes that when it says, “God saw all that he had made and it was good,” that means her body as well. It also means mountains and trees and iguanas, but one’s body is a great place to start.

Theologically, the idea that the material world is good makes sense—after all, God wouldn’t have taken on a human body if flesh were inherently evil. Christians believe Jesus was fully man and fully God. Yes, he came to redeem the world, but he did so eating and drinking, walking and sleeping. And working. Jesus was a carpenter, for goodness sake—he worked with wood, with callused hands and with sweat in his eyes. Jesus’ full participation in the material world sheds a holy light on all manner of “earthy” jobs, from ditch digging to diaper changing to gardening to fish and frog studying.

This grounding in the goodness of creation has inspired our work with A Rocha (arocha.ca) these past twelve years. While our theological understanding of creation’s goodness has not demanded that any of us don bikinis on a regular basis, it has compelled us to restore salmon streams, grow organic vegetables, and open the wonder of creation to children on field trips. It has also inspired us to pay attention to the world around us, reverently acknowledging the goodness of creation and the Creator who made it.

3 responses to “Swimwear for Earthkeepers”