Postcards from the Middle East by Chris Naylor: 2. Bedouin hospitality 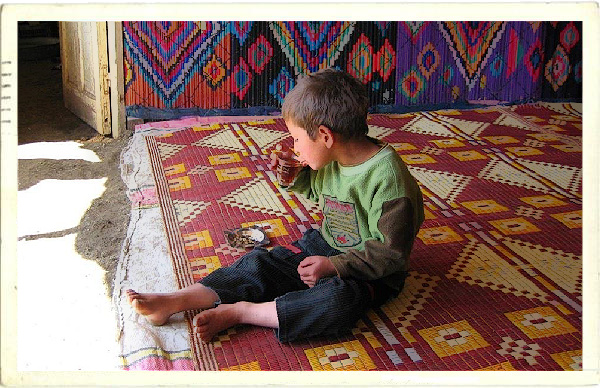 A little boy enjoys a tea-break at a Bedouin encampment

The tent was dark but warm inside, a simple wood stove providing a flickering light. The bitter, piping-hot coffee was in an elaborate brass pot. Abu Nizar was the proud father of three boys and four girls. Most of the year they lived in Homs in Syria but each spring, and sometimes in the autumn, they would get the tent out of storage and make the trek to the Bekaa for extra work. He had only brought his five younger children with him this year. Nizar, his eldest son, was studying engineering at university in Syria, and his younger brother was doing compulsory military service. Abu Nizar was not sure where – perhaps here in Lebanon.

We talked about the wetland. The family loved coming here in the spring. The work was good but they also loved the clean fresh air, the mountains and the luxuriant grass for their flock, but they did not like coming in the autumn. Abu Nizar explained that starting in the war years, sheep and goat flocks several thousand strong would descend on this last oasis of green in a region parched by the long hot and dry summer. Everything would be eaten or trampled under a legion of cloven hooves. The long-dried pools, drained by the water pumps to irrigate the fields, would be dust bowls aching for the winter rains.

I thanked my gracious host for the coffee and followed one of the numerous goat tracks from the tent and back to the springs, the source of the marshes. Using the cracked limestone pavement as stepping stones around and over the gurgling springs, I found the mini fountains feeding a long thin pool, a temporary reservoir on the flood’s journey into the wetland proper. A sluice gate, long broken, bore testimony to former days of water control. Despite abandonment, the canalized river still took much of the water eastwards under an avenue of plane trees, many broken or missing like a neglected row of teeth.

It had not been a promising start. I found a comfortable stone and sat waiting to see if dusk would bring any roosting birds. Unlike at the picnic in the summer there had been little in the way of birds through the afternoon. My notebook only recorded a handful of species; over-wintering Stonechats and Bluethroats, early migrant Reed and Sedge Warblers, Lapwing and Coot. Perhaps it was the paucity of the birds but I had not met a hunter either, although the sounds of gunshot weren’t far away. But as I sat looking out over the now grey, ruffled water, the sounds of hunting and the occasional passing car on the road behind was drowned out by the cacophony of croaking from a thousand frogs.

Unexpectedly farmyard sounds cut through the amphibian mating calls. Expecting to see geese near the Bedouin tents, I soon realized the honking was above me as a flock of a hundred or so Common Cranes flew feet over my head. As I scribbled numbers in my notebook, my attention was immediately refocused as a party of a dozen pelicans, in shallow descent, a contradiction of elegance and bulk, alighted silently on the water. As the winter gloaming slowly erased the wetland, other flocks were coming into roost; a mile or so to the east, perhaps another 200 cranes, and maybe fifty more pelicans a good way beyond the first flock. Thirty storks, probably white but perhaps with black amongst them, landed nearby. Just in front of the trees the solitary splendour of a slowly flapping Spotted Eagle was just visible before it disappeared in the gloom.

And then it was a very different sound that cut through the tranquil evening. From behind the avenue a bevy of bullets spat in staccato fire, with the signature sound of machine guns slicing through the latest flock of White Storks trying to roost in the reeds. Heavy shapes tumbled from the sky but the majority of the flock lifted in unison and with extraordinary grace rose above the carnage and into the evening mist that was rolling in from the east. More bursts from the AK-47s raked the fog and reeds as the unseen hunters realized they had scared off most of their quarry. As anger welled up inside me, I knew it was time to leave. This was not a safe place to be. So, shouting loudly to alert the machine gun-wielding hunters that it was not just birds in the marshes, I ran for the car, just able to make out in the gathering gloom figures stripping the wings off dead storks and loading their bloodied corpses into the back of a military-looking jeep.

As I drove home, in some shock, I realized the Aammiq wetland was like a metaphor for Lebanon as a whole; stunningly beautiful, warmly hospitable, with overabundant life that could be extinguished with the pulling of a trigger.

This is the second of six excerpts from Postcards from the Middle East by Chris Naylor. Published by Lion Hudson in March 2015, it can be ordered from its page on the Lion Hudson website

2 responses to “Postcards from the Middle East by Chris Naylor: 2. Bedouin hospitality”