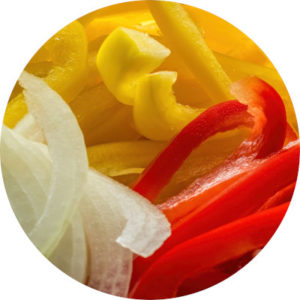 The first part of this two-section blog looked at some of the ethical issues around meat and vegetarianism, particularly regarding ecological sustainability, animal welfare and human health. I argued that there are substantial ethical reasons to, at the very least, reduce meat-eating and avoid factory-farmed meat, even if we do not choose to become completely vegetarian.

However, apart from broad ethical guidance, what do the Bible and Christian theology offer to this subject? As with many subjects, it’s easy to find convenient verses or passages to reinforce set opinions. So, vegetarians may start with Genesis 1:29-31, where humans and other animals were given ‘green plants’ to eat in the context of God’s ‘very good’ creation. Meat eating only enters the picture after sin and judgment. In contrast, carnivores will point to Jesus feeding the 5,000 with fish, his participation in the Passover meal (including roast lamb) at the Last Supper, and his cooking (and presumably eating) fish even after the Resurrection. For a balanced biblical approach, we need to take all the relevant passages into account, search for overarching theological principles, and seek to discern a direction of travel in the biblical narrative.

The most fundamental biblical point is that God created, owns and cares for all living creatures (Psalm 50:10-11). Throughout the scriptures, we see this affirmed repeatedly: Genesis and the Psalms show a God who delights in the diversity of living creatures (Genesis 1:31; Psalm 104), Job and the Psalms declare God’s provisioning care for wild and domesticated animals (Psalm 145:8-10; Job 38:39-39:30), and the Old Testament law requires God’s people to think of the welfare of working animals (Exodus 23:12). Whilst there are a few ‘difficult’ passages in terms of animal welfare, such as Jesus allowing a ‘legion’ of demons to enter a herd of pigs and drive them to destruction, these are difficult precisely because they appear to go against the clear flow of most of scripture. Passages like this need to be wrestled with (and indeed there are several theological ways of understanding the Gadarene pigs), but it is clear that the central theological point of the passage centres on Jesus’ power over the forces of evil, rather than justifying cruelty to animals. The overwhelming thrust of biblical passages concerning God’s attitude to animals, points against anything that reduces living creatures to commodities (Deuteronomy 25:4, Matthew 10:29-31), that is careless to their suffering (Exodus 23:5, Proverbs 12:10, Jonah 4:11), and that exploits them purely for profit or convenience (Genesis 7-9, Deuteronomy 5:14, 22:10). Just as Old Testament prophets saw worship without justice as empty and meaningless, I would ask how any Christian can claim to worship God yet continue eating meat from animals God creates, owns and values, knowing they have been cruelly exploited in factory conditions? 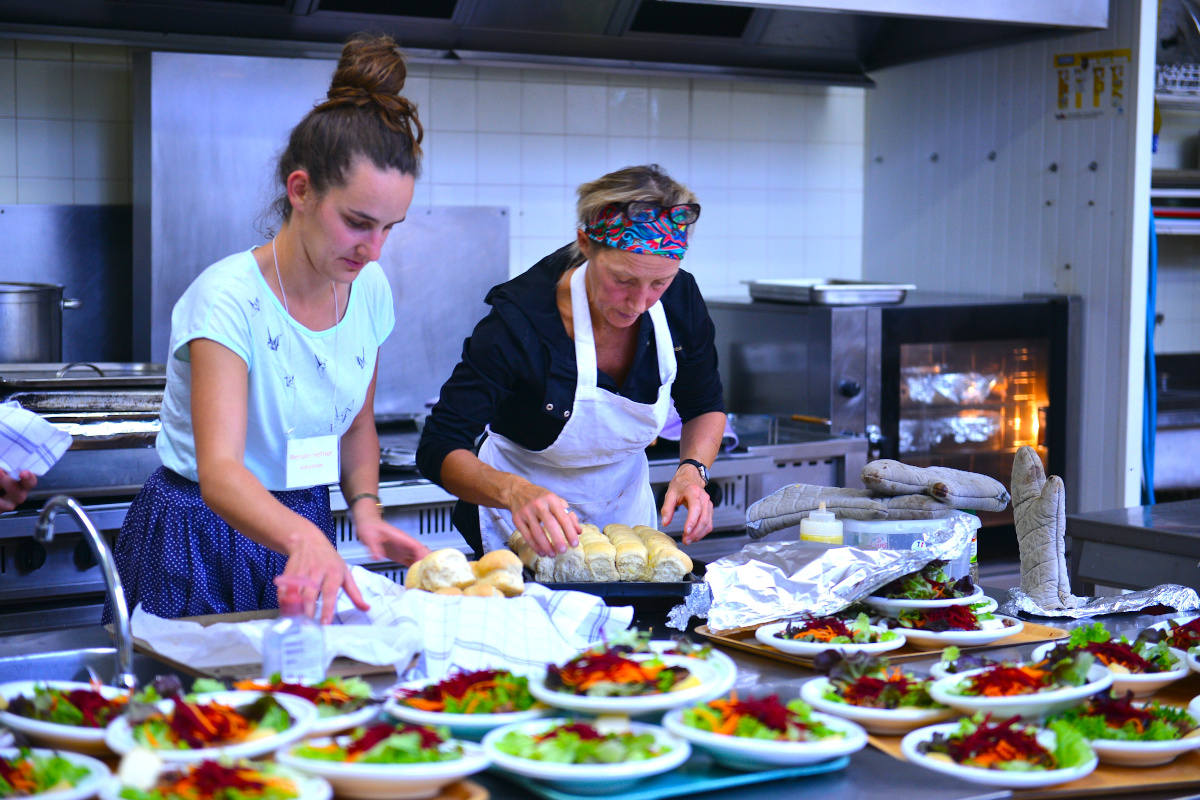 Renate and Shelley preparing a vegetarian meal at Les Courmettes

A second important theme is that, within a fallen world, God does allow humans to eat meat within carefully proscribed limits . In the Old Testament, meat eating was permitted after the flood and within the context of sacrifices to God. It is quite likely that ancient Israelites usually only ate meat that had been offered to God in sacrifice. Thus, the sacrificial system, rather than – as some have alleged – being a barbaric waste of life, actually elevated the value of animals as worthy of offering to God, and made their death something that could only happen within the context of worship[i]. God’s declaration of some species as ‘clean’ and others ‘unclean’ was not about their value to God: everything God made is ‘very good’! Rather, they were out-of-bounds for human consumption within the Old Testament covenant system [ii]. When, in the New Testament, God commands Peter in a dream to ‘rise, kill and eat’ even such taboo creatures (Acts 10:9-16), the context is primarily about Gentiles no longer being outside God’s plans, but also recognizes that Old Testament taboos no longer apply. The scarce New Testament guidance about meat concerns avoiding food offered to idols (Acts 15:20-29; 1 Corinthians 8:1-11:1), largely because of the spiritual danger and the risk of leading others astray. The fact that Jesus as the only perfect human ate meat, suggests that Christians today must not legalistically demand vegetarianism on theological grounds, although – as we have seen – there are strong ethical reasons. 1 Corinthians 8 is helpful. Written in the context of meat offered to idols, Paul argues ‘I have the right to do anything – but not everything is constructive. No one should seek their own good, but the good of others’ (v.23-24). Transposing this to our current context, where animals are mis-treated in massive numbers by the industrial meat industry, a rapidly-growing proportion of young adults believe eating meat is immoral, and yet where many livelihoods depend on livestock farming, Christians have a moral duty to consider the impacts of their decisions on others (including animals), rather than acting selfishly.

Finally, there is also another, sometimes neglected, major theological theme to consider, namely God’s saving purposes and future plans for animals. For Christians, Jesus is central to this, and the New Testament uses deliberately provocative language to describe Jesus’ incarnation. Jesus did not only become a man (anthropos) but became ‘flesh’ (sarx; John 1:13-14), the same word used for meat or animal flesh. The Creator became a creature, and entered into what we share as part of creaturely life: breathing, growing, sleeping, eating and drinking. This is not a theological mistake but a recognition that sin and death have affected not only humanity but every part of God’s good creation, and that God’s saving plans in Jesus are not simply to redeem human souls or even human bodies, but to ‘reconcile all things to God’ (Colossians 1:20). So, animals are not only valuable because God creates and cares for them, but because they are included in God’s plans to set creation free from its bondage to decay (Romans 8:21) . This is why biblical pictures of future harmony beyond judgment – shalom – consistently include harmony within the animal world and between humans and other creatures (e.g. Isaiah 11:6-9; 65:17-25). Whilst scientists and even some theologians struggle to grasp how a lion might become vegetarian, surely it is no more miraculous than a man rising from death, or you and I becoming free from sin?

In conclusion, whilst we are permitted to eat meat (as long as the animals are humanely-treated and reverently killed), the challenge for Christians is to live in the light of God’s saving work in Christ. An increasing number of theologians suggest that, ‘proper human interaction with the nonhuman creation is defined not by what is, but rather what will be, eschatologically.'[iii] In other words we should, as far as possible, live in the light of the transformed relationships that we will enjoy when Christ returns and this world is made new. That does not mean forcing lions or pet cats to be vegetarian, because they are not ready for that, but we can choose to anticipate the peaceful kingdom when heaven’s values transform earth. As Jurgen Moltmann says, ‘If we were to surrender hope for as much as one single creature, for us God would not be God'[iv]. Personally, I do not claim we are all required to become vegetarian, but – when the theological arguments are added to the ethical ones – I believe it is a very strong case. So, how about starting by cutting down, and then cutting out meat altogether for one day a week, then extend it and see how you get on? At very least it should make you value meat more if you do eat it, and recognize the importance of every creature that God values.

[i] ‘Having made these living creatures [Gen 1 “very good”] the God of Genesis does not suddenly turn round in Leviticus and revile them. God is not capricious and inconsistent. … The God of Leviticus requires an account of blood of animals shed.’ Douglas, M. (1999). Leviticus as Literature. Oxford, OUP, p.11.

[ii] ‘Animal life is inviolable except for a few edible animals, provided they are slaughtered properly (i.e. painlessly…) and their blood (i.e. their life) is drained and thereby returned to God.’ Milgrom, J. (2004). Leviticus: A Book of Ritual and Ethics. Minneapolis, Fortress Press, p.12. 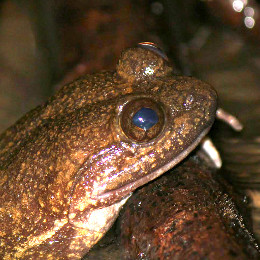 Should we save endangered species?