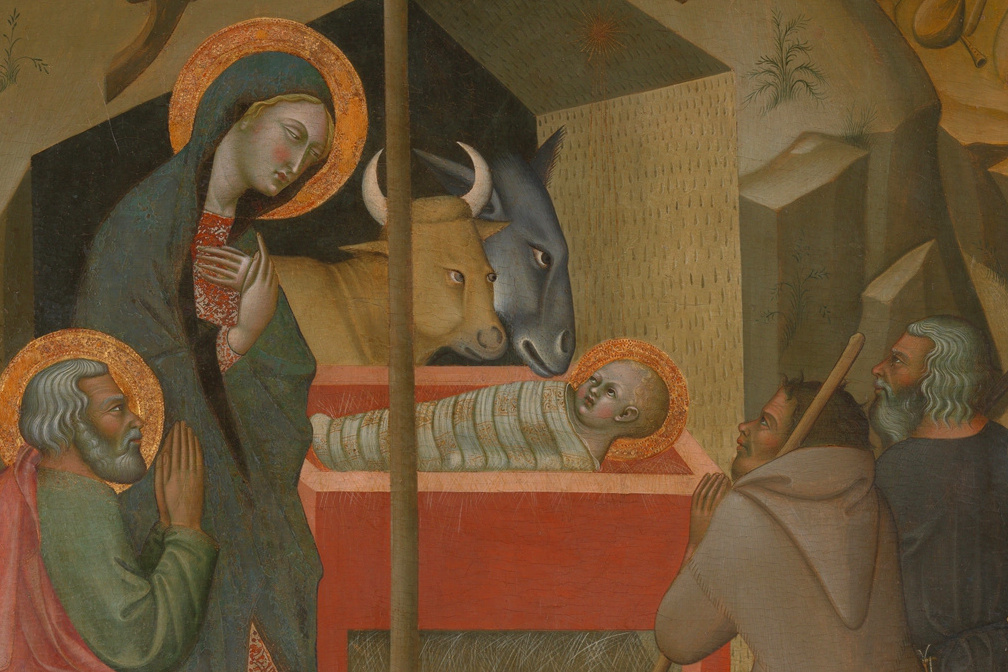 Adoration of the Shepherds, by Bartolo di Fredi (c. 1374)

‘Christmas for animals’ may invite thoughts of unwanted puppies. Or unhappy Turkeys (I particularly recommend Benjamin Zephaniah’s wonderful poem, ‘Talking Turkey’ [see video]) or whatever animal your national Christmas dinner incorporates. But there are much more ancient traditions at work too. Think of the words of some Christmas carols (‘Ox and Ass before him bow’ from ‘Good Christian Men Rejoice’), and of mediaeval nativity scenes by painters such as Fra Angelico and Giotto. In fact the theologians Origen and Clement of Alexandria, right back in the 2nd century, linked Luke’s version of Jesus’ birth with Isaiah 1:3 which states, ‘The ox knows its master, the donkey its owner’s manger, but Israel does not know, my people do not understand.’ To Origen and Clement, the animals around Jesus’ manger were contrasted with Israel’s rejection of Jesus and also represented those who believed (the Ox for believing Jews, the Ass for Gentiles)[1].

Another fascinating example comes from a 1701 wood-cut portraying animals speaking in Latin around the baby Jesus[2]. Their words need to be spoken aloud to appreciate the humour of, for instance, a Raven croaking ‘Quando’ and sheep bleating ‘Bethlehem’. The picture shows the following:

The cock crows: ‘Christus natus est.’ (Christ is born)
The raven asks: ‘Quando?’ (When?)
The cow replies: ‘Huc nocte’ (This night)
The ox lows, ‘Ubi? Ubi?’ (Where? Where?)
The sheep bleat out, ‘Bethlehem, Bethlehem’
Voices from heaven sound: ‘Gloria in Excelsis!’ (Glory be on high)

So, are such portrayals of animals worshipping Christ simply flights of fancy, and an excuse for cutesy nativity plays with toddlers dressed as little lambs shepherded by older kids with tea-towels around their heads? Not at all! They should be powerful reminders that Christmas is not only for humans! Christmas is God entering the creation he spoke into being. Jesus not only became a human being. He became an animal – a mammal – and through him not only humans but all creatures are included in God’s saving plans. Christmas is good news for all creation – the culmination of what began when God looked at all that he had made and proclaimed it ‘very good’. The birth of Jesus is the dawning of the hope contained in the rainbow of Genesis 9, a promise of God’s saving covenant with ‘every living creature upon the earth’. It was foreseen by the prophets too. Hosea envisaged a day not only when swords would be beaten into ploughshares but when God’s covenant would be ‘with the beasts of the field, the birds in the sky and the creatures that move along the ground’. All these hopes are brought together in the Messiah, God’s chosen One, the infant Jesus whose birth, life, death and resurrection make possible the renewal of all creation.

So, in this Christmas season, amidst the secularism and sentimentality, have a thought for God’s other creatures for whom Jesus’ birth is also good news. Consider the birds – including the ethics of factory-farmed turkeys. Consider the lilies – hopefully not air-freighted at huge cost to the planet and to sustainable livelihoods. And why not take a walk outdoors around your neighbourhood? Listen and look for the signs of creation worshipping our incarnate and risen Lord, and groaning in anticipation of being set free from its bondage to decay, waiting to join in the glorious freedom of God’s children (Romans 8:18–22).

7 responses to “Christmas for animals”