A fatwa for nature

The news that Indonesia’s senior Muslim clerical body, the Ulema Council, has issued an unprecedented fatwa against illegal hunting and the poaching of endangered species has caused considerable media interest. In the secular west, two typical reactions (nature good, religion bad) seem to meet each other coming from different directions, but on the whole the news has been received positively. Conservation organizations such as WWF, who work in countries where religious groups are highly influential, have welcomed the fatwa as a positive step forward. As for A Rocha, our teams in Ghana, UK, Lebanon and Kenya have had their own productive partnerships for conservation with Muslim groups and their leaders. 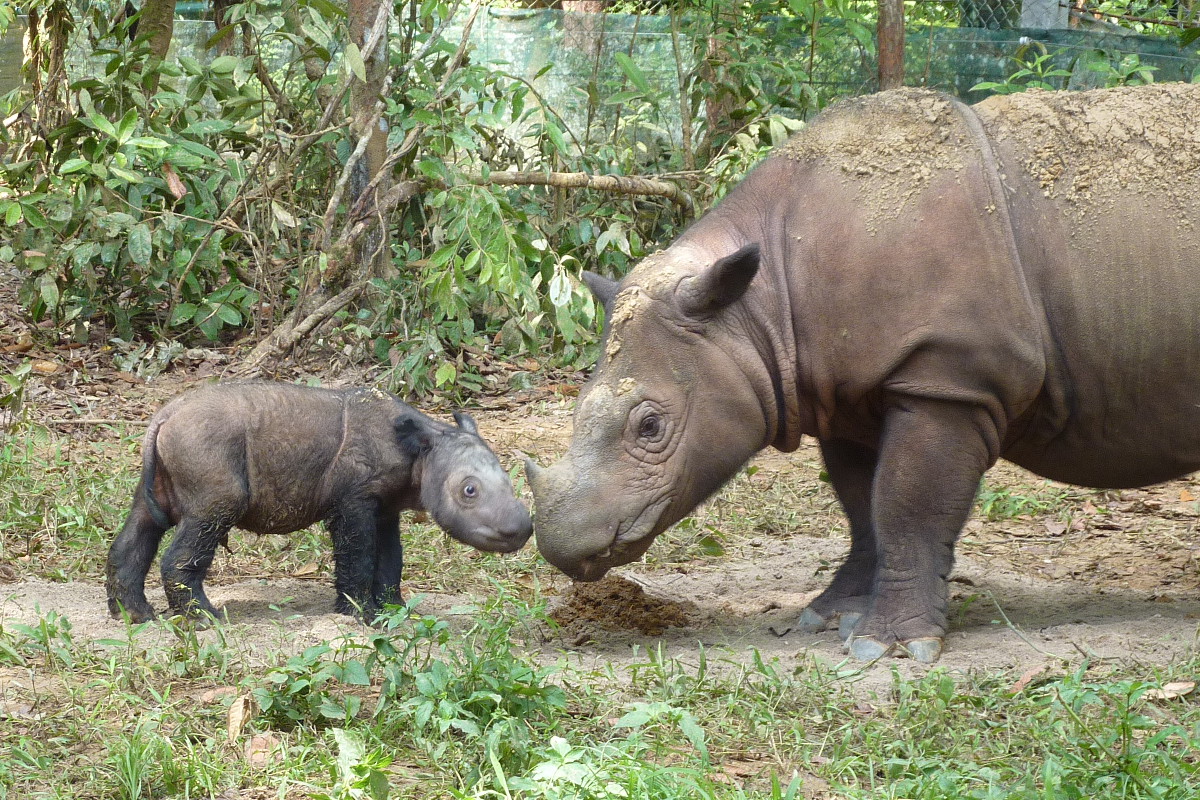 The Indonesian Fatwa will help to protect the many Critically Endangered species in Indonesia such as the Sumatran Rhinoceros (Dicerorhinus sumatrensis) pictured here. The image shows Ratu and her four-day old offspring Andatu – the first Sumatran rhino to be born at the Sumatran Rhino Sanctuary in Indonesia. Andatu means “Gift from God” in Bahasa. It is likely that there are less than 200 Sumatran Rhinos left in the wild.
Photo credit: Susie Ellis, IRF

Either way, the story serves to illustrate that it is now mainstream for conservation organizations to understand that religious groups can play a central role in achieving conservation goals. Influencing human choices and behaviour so that we do not make a bio-desert of the world around us is now seen as a critical component of species and habitat protection, so the beliefs that determine those choices and actions are increasingly under the spotlight. One familiar and quite pragmatic approach is to celebrate and promote the teachings about sustainable living that are within many religious traditions. Organizations such as the Alliance of Religions and Conservation have been working hard to give visibility to such perspectives and to bring their insights to the fore. They have done a great deal around the world to encourage those who wish to put them into practice. More recently, initiatives to reach out to ‘faith groups’ have emerged from most of the major secular environmental NGOs. So as we welcome all of these developments, perhaps this particular Christian conservationist might be permitted a couple of comments to his secular friends?

The first is to remember that people within each ‘religion’ do not typically understand themselves as belonging to a convenient category called ‘faith groups’ which can then be recruited for conservation. While they share more common ground than is often apparent, and certainly conservation is one of the areas where people from different faiths more readily agree, even so they adhere to the beliefs of their particular community. Those beliefs are distinct and resist facile synthesis and ‘faith’ as popularly understood is not necessarily a common denominator. In fact, if you take the example of some western Christian groups, their world view will frequently have far more in common, culturally and intellectually, with that of their secular, agnostic neighbours, than with Hindu believers in the same street. So, while it might be convenient for those of a secular viewpoint to approach ‘religious groups’ as one, and so to approach all ‘faiths’ as if they were the expression of something called ‘religious belief’, experience has shown that it is those within a particular faith community who are best able to talk meaningfully with their fellow believers on their own terms. While celebrating the benefits of interfaith partnerships and collaboration, when it comes to advocating for conservation, we need to resist the temptation to lump everyone together under the heading of ‘religious people’. A more fruitful approach is to encourage and equip the conservation leaders and spokespeople within those different faith communities, making partnerships where distinct differences are acknowledged.

The second comment is one about definition. What are ‘religious’ or ‘faith groups’? Historic and formalized religions may be easily identified, but the consensus of environmental commentators all over the world is that it is global, contemporary and unformalized beliefs, such as materialism and individualism which are undoubtedly causing the greatest environmental havoc. Unfortunately, they can be found to be powerfully influential even within faith communities such as Christian ones which should give them no shelter. So, as well as recruiting ‘the historic faiths’ to the cause, the conservation community needs to establish credible alternatives to these dominant western-led or western-derived ‘quasi-religious’ creeds. As that very community is currently involved in its own lively and essentially religious debate about how to value nature, we can take it as a good sign that the old secular and invalid framing of faith as illusion, and conservation science as objective reality, has finally broken down. It only remains for a more effective and united challenge to the contradictions of materialism and to the exclusively financial measurement of wealth to emerge. And for more careful and inclusive distinctions to be made when we talk about religion or faith groups so that civic, political, business and finance leaders are equally called to articulate more clearly the beliefs that so obviously lie behind their environmental choices.

4 responses to “A fatwa for nature”