Towards a theology of washing-up

Which is better, using a dishwasher or washing dishes by hand? Recently a group of A Rocha team members − usually scattered across several continents − were together for a week of meetings. We self-catered and the kitchen had a dishwasher as well as a double sink, so debate ensued about the comparative virtues of washing dishes by hand or machine. I realize this is a rich-world dilemma, but as it comes up in discussion so often and raises some interesting issues, I thought it worth reflecting on. 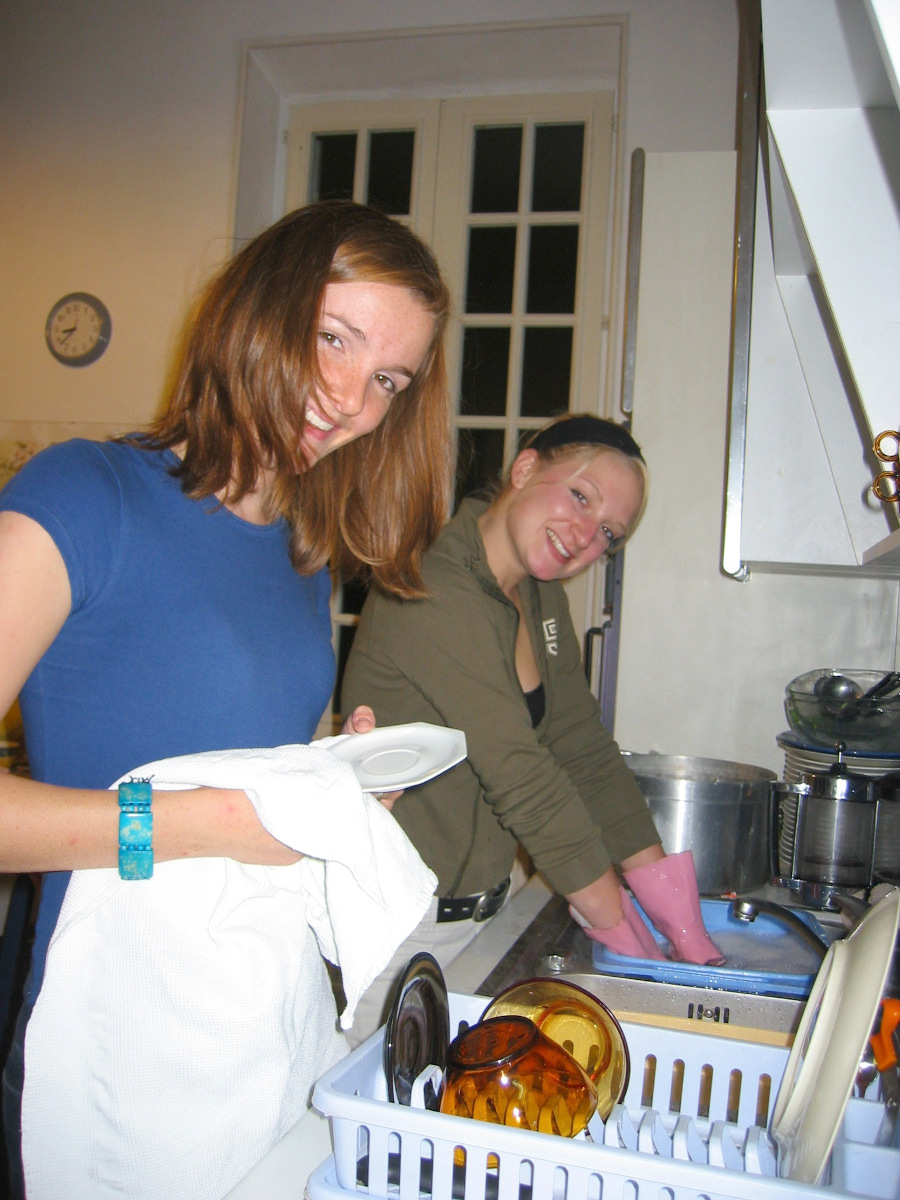 Washing up at A Rocha’s field study centre in Provence

Most discussions of the subject limit themselves to the technical considerations: which method is greenest / cleanest / uses least CO₂ / uses least water / saves most time? There are numerous newspaper, magazine and website articles that claim with relief and delight that ‘surveys prove’ dishwashers win the day! Being the suspicious person I am, I decided to investigate this claim. Are such surveys sponsored by dishwasher manufacturers? As far as I’ve been able to discover all of the articles go back to one source: a survey across four European countries conducted by Christian Paul Richter and others from the University of Bonn, Germany between 2006-2007, resulting in several published papers in journals [1][2][3]. The articles never refer to any sponsorship but a quick web search reveals the project’s ‘partners’ were two dishwasher manufactures (Electrolux and ASKO) and two companies who make dishwasher tablets (Henkel and Reckitt) [4]. Of course that doesn’t mean the survey itself wasn’t conducted independently and scientifically, but it is important data to note.

As for the survey’s results – and I’ve read the articles thoroughly − they are far less conclusive than the ‘Dishwashers are greener’ headline so often quoted would suggest. As with so many things, the real answer is, ‘It depends’. Yes, dishwashers save time and get crockery cleaner, especially − as my late Uncle Alec who was a medical Doctor always reminded us − if you use dirty tea-towels to dry dishes! Also (and listen to all the ‘ifs’) if you have a new efficient dishwasher, if you only use it fully loaded, if you always use an Eco low-temperature setting, and if your electricity is ‘green’ then it will use less water, CO₂ and detergent than the average hand-washer. However, if you’re only washing for 1 or 2 people, if you pre-wash extensively, if you wash at high temperature, and if you use the machine half-full (because you’ll run out of plates otherwise!) then hand-washing is going to be better. The survey also showed a huge variety of hand-washing styles! Clearly if you run a hot tap (faucet for my North American friends) non-stop you’ll waste an enormous amount of water and energy. But, if you scrape off all food-waste first, use one bowl for washing and another for rinsing, and your water is heated by gas (far more efficient than non-green electricity) you may well be greener than your mechanized neighbour.

So much for the technicalities; what interests me most is why people desperately want a dishwasher to be OK or stubbornly defend hand-washing … and that’s where theology comes in. In the end, washing the dishes is an everyday household task that can either be a chore or an opportunity for worship, service and community-building. As Tim Chester reminds us in ‘The Everyday Gospel: A Theology of Washing the Dishes’[5], the way we do small daily tasks is an expression of our relationship with God as much as a ‘spiritual’ conversation. Washing the dishes, like walking kids to school, hanging washing on the line, or sorting recycling can be chores we resent, or can express something of our relationship with God.

Similarly, mechanization removes us from getting our hands dirty (or in this case, squeaky clean!). Imagine if Jesus, instead of rolling up his sleeves and washing his disciples’ dusty feet, had paid somebody else to wash them, or given them an electronic foot spa. It wouldn’t have been the same. Machines are good servants but terrible masters. I’ve too often seen people spend ages loading and unloading dishwashers whilst doing so much pre-washing and washing of pots and pans by hand, that the time and eco-savings must have been more than cancelled out … but somehow, once the machine is there, we become addicted to using it. If you have a dishwasher, by all means use it when you’ve a massive load of plates and it can be crammed full whilst you relax with guests, but don’t feel you have to use it every day.

Finally, dishwashing by hand can be a wonderful way of deepening community and building relationships − and this gets to the heart of what attracted me to A Rocha in the first place. There’s a custom in many A Rocha centres that guests rest on their first day but after that everybody joins in with washing and drying the dishes. We’ve tried to do the same in our family, including with visitors. Modern teenagers may look terrified when first presented with a tea-towel but they’re soon joining in the banter, dancing to the songs that always get played in our kitchen, and relaxing, laughing and not even noticing they’re working too. Discussions around our kitchen sink range from the silly and superficial to the painful and philosophical, but doing something manual together seems to invite conversation and friendship.

So, where do you stand on this? At the sink, arms deep in soapsuds, or sipping your coffee whilst the machine takes the load? I’d love to hear your reactions, and if you ever pop round you’ll find we have a dishwasher in our house too, and his name is Dave.

Lockdown, Genesis & our need for Nature

3 responses to “Towards a theology of washing-up”