The power of China

I recently returned from a lecturing visit to Hong Kong, Beijing and Yanji (north-east China). Speaking about environmental sustainability to students and professors in three such very different contexts got me thinking afresh about China’s place in the world and its significance. My thoughts here are inevitably personal and subjective. 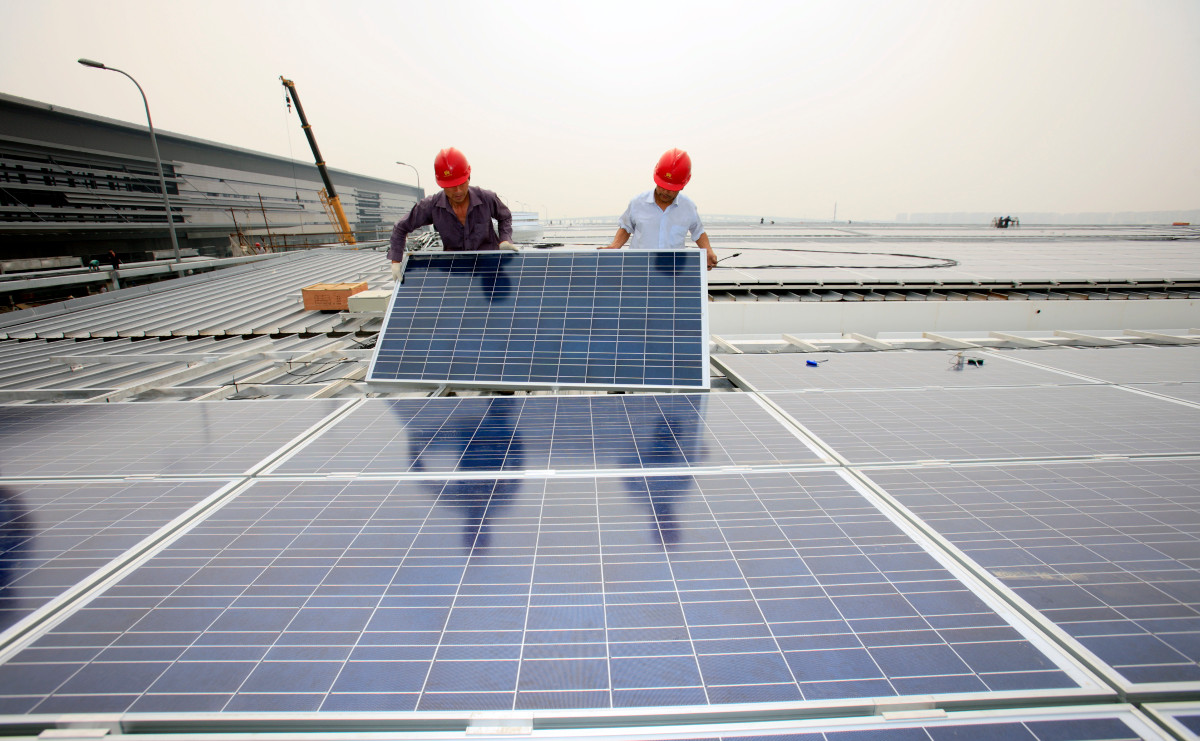 Workers laying some of the 23,000 solar photovoltaic panels on the roofs of the Hongqiao Passenger Rail Terminal in Shanghai. © Jiri Rezac 2010 (CC BY-NC-SA 2.0)

First impressions: China is moving fast on so many fronts. The speed of growth and change is phenomenal. Flying into Beijing we were one of three planes simultaneously landing on parallel runways, and our taxi negotiated the 6th ring-road, then the 5th and so on as we headed towards the centre. High speed rail links are expanding fast, and the Beijing metro system is the most efficient, clean, fast and easy-to-use I’ve seen (as well as cheap!).

Whether it’s flexing its muscles in the South China seas or building railways and factories in Africa and South America, China is the new global superpower. In the 19th century it was Britain, France and Germany, in the 20th it was the USA and Russia, but now the world is waking up to China’s global economic power. The potential for that power to be used in ways that are either environmentally positive or negative is vast, and those choices are being made now.

The speed of economic change has brought hundreds of millions out of poverty but has had huge social and environmental costs too. Families are often separated by work, with the rural elderly feeling neglected, I’m told, and the pressure to succeed overpowering. Consumer-based materialism has rapidly become China’s unspoken urban ideology. Pollution levels in China’s cities are toxic, and the effects of climate change and deforestation on extreme weather events such as flooding, landslides and dust-storms are devastating.

Whilst I was in China, news came through of President Trump’s withdrawal from the Paris climate agreement. China’s response was immediate and unequivocal: a commitment to work with the EU and others for the global consensus and the Paris agreement. China has undergone a remarkable about turn environmentally, in the way only a command-and-control economy can do. Whereas ten years ago there were stories of new coal-fired power stations every week, now, according to Forbes ‘Coal is dying in China because of pollution’, and the Financial Times warns ‘aluminium and coal sectors will be rocked by Chinese clean air push’. In 2016 China added more renewables in one year than Germany’s total supply, forming 25% of its total energy production [*]. There is still much to be done, not least in protecting biodiversity and the trade in endangered species, but there are positive recent stories in both these areas too [*, *].

In this context, where is the Chinese church? Numerical estimates vary, because many attend unregistered ‘house churches’ rather than the official Three Self and Catholic churches, but some reckon as many as 10% of mainland Chinese are now Christians. The government seeks to control religion carefully, and has recently sought to persuade house churches to register too. One result is that faith is often intensely personal in order to avoid politics, and there has been very little teaching or thought around a biblical approach to environmental issues, economics and lifestyle. Yet I met Christians in highly-placed positions in universities and research institutions who were keen to relate their faith to their work.

Once again, China’s potential is huge. Imagine if Chinese Christians were to catch a vision for creation care and for seeking God’s glory through a sustainable future? Imagine if A Rocha’s vision were to truly take root in China? Thirty years ago, it seemed impossible that Christianity would be thriving in China but now it is. Wouldn’t it be amazing if Chinese Christians became the next generation of A Rocha’s leaders, pioneering indigenous biblically-based conservation initiatives? If you share that vision, join me in praying for China’s church.

Dave’s book on the biblical basis for creation care, ‘Planetwise’ is available in Chinese from https://shop.campus.org.tw/ProductDetails.aspx?productID=000501163