When I read modern history at University in the 1980s, we studied India’s ‘Green Revolution’. In an attempt to feed a growing population and avoid cyclical famines, there was massive investment during the 1960s–70s in ‘modern’ agriculture, with irrigation, seed improvement, mechanization, and abundant insecticides and pesticides. The ‘Green Revolution’ was held up as an example of progress: how technology can save and feed us all.

Today things look rather different. Yes, productivity grew initially, and it was claimed at the time that millions were lifted from hunger, but there were heavy costs. The social and economic costs are complex to analyse, but included placing small farmers in the power of moneylenders and multinational corporations. Farmers used to living off the land were forced into a cash economy and often into debt: 300,000 Indian farmers are reckoned to have committed suicide since 1995. Then the human health costs: again contested by some, but the indiscriminate use of chemical additives seems to have had severe consequences on drinking water, child mortality and disability, and other diseases. The state of Punjab, known as the bread-basket of India, has been described as “in the grip of a terrible environmental and health crisis emanating from the intensive farming practices involving large doses of chemicals and pesticides in use for the past four decades.” Punjab has 2.5% of India’s agricultural land but uses 18% of India’s pesticides.

The environmental costs have been significant on several levels. Large scale mono-crops and the heavy use of insecticides inevitably reduce biodiversity, both within agricultural land and in neighbouring ‘wild’ areas. The collapse in honey-bee populations around the world may be a ‘canary in the coal mine’ when it comes to the impacts of agricultural chemicals on ecosystems [*]. Moreover, the fertility of the land has been progressively destroyed, necessitating more and more fertiliser use. Not only does this create a cycle of dependency on polluting and decreasing fossil fuels (vital for producing artificial fertilisers), it also destroys the fertility of the soil itself. 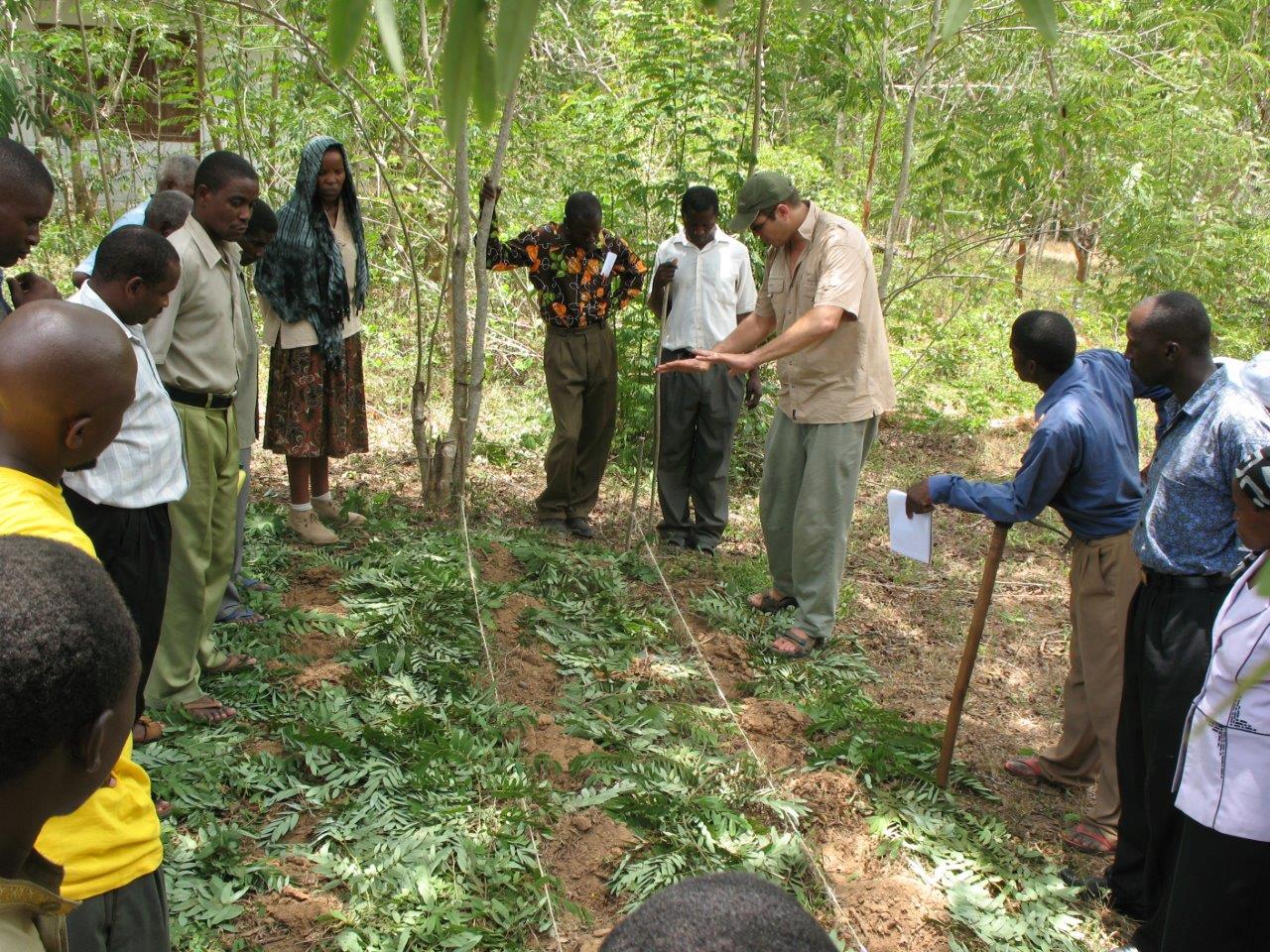 Church leaders who live around Dakatcha Woodlands, Kenya, learning how to do Farming God’s Way

And that brings me to the questions: can we feed the world without destroying communities, cultures and creation? What, if anything, does the Bible have to say about soil, farming and land-use? Rather a lot, it turns out! If you want to look in detail I heartily recommend Ellen Davis’ book Scripture, Culture and Agriculture: An agrarian reading of the Bible. At its heart – and the Bible’s – is the recognition that land is not a commodity but a community, of which we are part. We are, in the beginning, made from soil: Adam from adamah, the dust of the earth. Soil, we now know, is not an inanimate object but a community of millions of micro-organisms. To poison it with artificial fertilisers and pesticides destroys its life and its capacity to renew itself. That’s why the so-called Green Revolution was a long-term failure. It failed to respect the integrity of the soil or the local knowledge of the people who had lived in relationship with it for centuries.

That’s also why ‘Farming God’s Way’, which works in over 20 African countries from Angola to Zimbabwe, is a genuine solution for small-scale farmers, for feeding people, and for restoring biodiversity … and all based on biblical principles applied to an African context. A Rocha Kenya and A Rocha Uganda have been using Farming God’s Way for years. Using local seeds, natural biological methods of pest-control, compost and mulch as fertiliser and to retain moisture (‘God’s blanket’), and combining this with biblical and science-based teaching about the interdependence of creation, the results can be fantastic! A recent email from Kenya talked about an onion crop on a Farming God’s Way plot producing 5x that of the neighbouring conventional plot, and all this in drought conditions.

So, how does your garden grow? Whether or not you grow food, all of us eat. In a world where millions still go hungry and biodiversity is disappearing, is chemical-fed agriculture the only solution? If God has created us to be linked with an umbilical cord to each other, to all creatures and to the land, then what we eat, how and where it grows, and what’s added to it, really matters. I’d love to have more discussion on this topic, but can I also encourage us to support and spread programmes like Farming God’s Way: for the sake of the poor, for the sake of the planet, for God’s sake?

3 responses to “Feeding the world and Farming God’s Way”