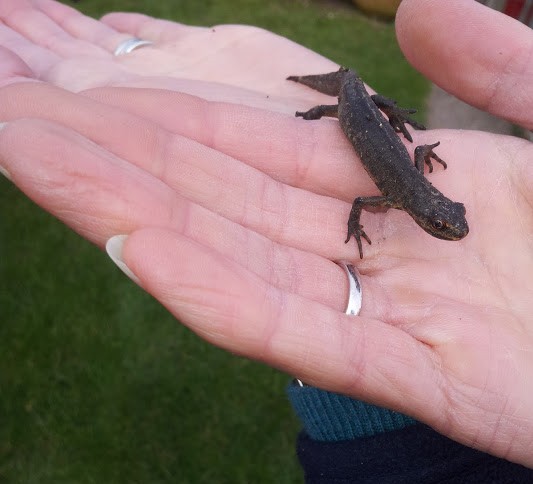 A pretty little newt came to say hello to me on my birthday. Okay, I’m not sure it was deliberate on her part. My husband, Greg, was digging out the pond and uncovered her, resting in the mud. It’s the first newt we’ve seen in our garden so he called us out to take a look.

What he didn’t realize is that newts hold a special place in my heart. When I was a child, a pond in a neighbour’s garden was full of them, and I used to spend hours on my own, sitting by that pond, watching them float up to the surface, catching, holding, and generally communing with them in my own particular way.

So it felt quite wonderful that this little newt appeared on my birthday morning, and it seemed to me that Mother Earth had given me her own birthday present, one that she knew would be particularly dear to my heart.

In my happiness, I tweeted and posted up the picture at the top of this article, with a note saying thank you to Mother Earth for my birthday present. I was then slightly bemused when someone gently reprimanded me for what I said, asking if I wasn’t maybe overbalancing into paganism, and why didn’t I thank Father God instead?

The comment got me pondering: is it wrong to attribute any sort of personality or agency to the inanimate world? Is it wrong to think that I might talk to the earth in any way? Does this lead me inevitably into paganism?

We are, of course, used to attributing sentience, personality and agency to the creaturely world, in stark contrast to Descartes who believed animals to be nothing more than machines. When my sister’s dog brings us a stick we say thank you to her and give her a friendly stroke, and when my daughter eats a banana in the evening, our rabbit wants some and hops over and pesters her until he gets a chunk. But what about the inanimate aspects of the natural world?

Interestingly, even if we don’t always notice it, the Bible seems to have no hesitation in seeing the inanimate world as having a sense of agency. The trees, mountains and hills rejoice when the people of Israel do what is right and listen to God (Isaiah 55), and the Psalms depict all manner of aspects of the natural world – both animate and inanimate – praising God (Psalm 148 being the most obvious example). This doesn’t stop with individual things either: the land is described as mourning because of people’s wrongdoing (Jer. 12:4, Hos. 4:1-3) and the whole creation groans in pain, like labour pains. Is this merely poetic language? Maybe…. I’m not so sure.

And then I was intrigued to sing the hymn, All Creatures of Our God and King, in Birmingham Cathedral this week, where I was speaking. I’m sure you know the hymn: it’s a firm favourite and definitely not considered unorthodox in any way. And there, right at the top of Verse 2, were the words, ‘Dear mother earth, who day by day unfoldest blessings on our way’. There it was – we were singing to mother earth, as if she was an entity who could act of her own volition, and no one batted an eyelid!

The hymn is based on St Francis’ Canticle of the Creatures (itself based on Ps 148) and he had no problem addressing different elements of the natural world – again both inanimate as well as animate – seeing them as his brothers and sisters.

It is in this tradition that our present Pope stands and this was a notable feature of his Encyclical, Laudato si’ (‘Praise be to you’). Indeed, he begins the whole thing by quoting St Francis’ Canticle: ‘Praise be to you, my Lord, though our Sister, Mother Earth, who sustains and governs us, and who produces various fruit with coloured flowers and herbs’.

Standing on the shoulders of these giants, many of us as Christians are re-discovering our kindred relationship with the rest of God’s creation and finding it both a humbling and inspiring journey to be on.

Pope Francis goes on to say, ‘We have forgotten that we ourselves are dust of the earth; our very bodies are made up of her elements, we breathe her air and we receive life and refreshment from her waters.’ Is it too much to go from this to thinking that we might receive other presents from her too, such as the appearance of a newt on my birthday?

This is not paganism. This sort of thinking is firmly rooted in a belief in a creating, sustaining, redeeming and saving God. What it is, is a deeper understanding of where we stand within the whole community of creation (to use Richard Bauckham’s lovely phrase) and a deeper appreciation of the need for us to live care-fully within this, our common home.

Ruth holds a PhD for research into simplicity and consumerism. She develops the theological thinking behind A Rocha UK’s work, and co-ordinates our small team of speakers. Ruth is married to Greg and they live in Chichester with their two daughters. You can follow Ruth’s blog at ruthvalerio.net.

View all posts by Ruth Valerio (3)

One response to “Father God, Mother Earth and a birthday newt”