‘If you’re asking me to choose between conservation and development, I’m going to choose development every time.’

My colleague, Rachel Lamb, and I received this comment repeatedly when we first arrived in the Democratic Republic of the Congo. We were at Université Chrétienne Bilingue du Congo (UCBC) in Beni, Eastern DRC, to participate in a week-long campus conversation around creation care. 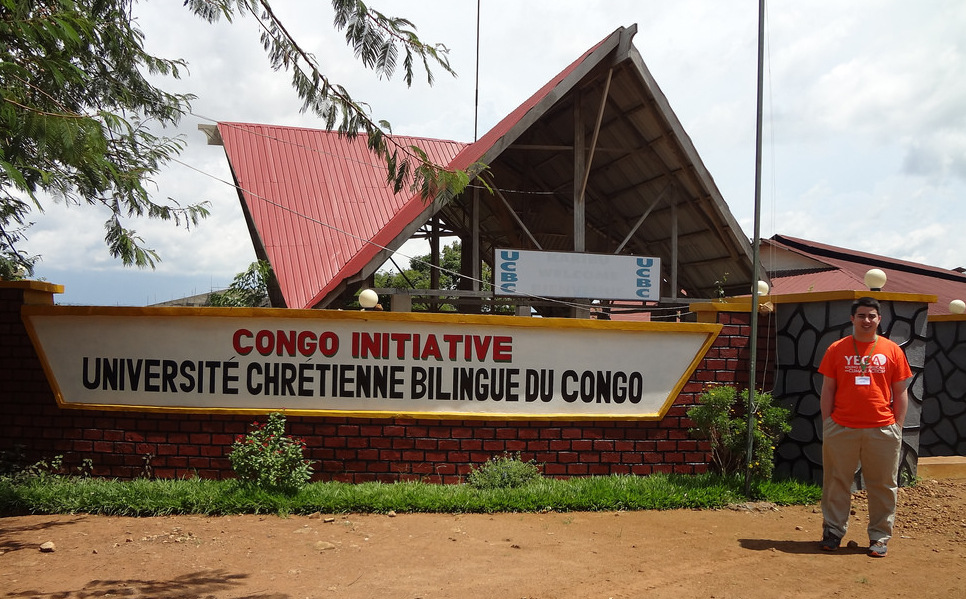 As its name suggests, UCBC is a bilingual Christian university run by the Congo Initiative with teaching in French and English. It’s located in a region that still experiences considerable instability and conflict, and was founded with the vision to raise up a new generation of Christian leaders to help the DRC heal from and grow beyond decades of war and corruption. That vision—along with their motto, ‘Transformed to Transform’—is bearing fruit in inspiring ways as students come together with remarkable initiative and entrepreneurship to identify and begin addressing the needs in their communities.

The conflict between conservation and development is one such major need. The Congo Basin contains the second largest rainforest in the world after the Amazon, and Beni borders Virunga National Park, which is home to many rare species including populations of Okapi and Mountain Gorilla. Conflicts are rampant between those trying to protect the park and its rich biodiversity, and those fighting to survive and utilize the natural resources to develop their desperately poor communities. Rebel and bandit groups are further destabilizing the region. Shortly before we arrived, the director of the government agency that manages Virunga was ambushed and shot. He survived but we saw photos from the funeral of a park ranger who didn’t.

So who do we side with here: nature or people?

Christians have a particularly strategic and hopeful role to offer in such challenging contexts. Jesus faced similar questions where he was asked to choose between apparently conflicting priorities. Should the Israelites honor Caesar by paying the imperial tax or honor God and thus subject themselves to the wrath of the Roman Empire (Matthew 22:15-22)? Should they stone the woman caught in adultery or let her live and so fail to uphold the Law of Moses (John 8:2-11)? In each case, Jesus didn’t fall into the trap of choosing from among the bad options presented to him. Instead, he created a third way that cut to the heart and brought reconciliation. Give to Caesar what is Caesar’s and give to God what is God’s; let the one who is without sin cast the first stone.

We too have an opportunity in situations like this to offer a third way forward. And Christian institutions such as UCBC have important roles to play in developing and modeling practical solutions that fit the local context. We don’t have to choose between caring for nature or caring for people. It’s a false choice. At the end of the day, we can’t care for people without caring for nature and vice versa. They have to go together in order to work. As humans we’re an integral part of nature and inextricably connected with all of creation. When the land isn’t healthy, people aren’t healthy, and when the land isn’t at peace people won’t experience peace either. Just as we are transformed to transform—as UCBC champions so well—we are also reconciled to reconcile.

What does it look like to reconcile the often-dueling priorities of conservation and development? The questions we received in Beni immediately reminded me of the work of A Rocha around the world, and why it’s so critical today. Community-based conservation projects—such as A Rocha Kenya’s ASSETS program, which we had the joy of visiting after our time in the DRC—are where the needs of the community and the proper stewardship and restoration of creation meet and move forward together.

UCBC has already started down this path with its pursuit of solar installations and appropriate clean energy technology, along with peace gardens, agroforestry projects, and more. They’re also partnering with us at Young Evangelicals for Climate Action around a Fellows program that will empower select students to lead their campus in the next steps of translating the growing awareness and enthusiasm into on the ground action and projects.

God is at work here—of this we were convinced during our short visit—and we’re excited about the fruit that will follow as UCBC moves forward in reconciling conservation with development on their campus and in their surrounding communities. Perhaps one day there may even be an A Rocha project here?

Formerly with A Rocha USA, Rev. Ben Lowe also served as the founding spokesperson and now senior advisor of Young Evangelicals for Climate Action. Ben is the author of Green Revolution, Doing Good Without Giving Up, and The Future of Our Faith (coauthored with Ron Sider). He is ordained in the Christian and Missionary Alliance and is currently pursuing graduate studies at the University of Florida. For more info: benlowe.net

View all posts by Ben Lowe (3)

5 responses to “Reconciling conservation and development”